Woo! Also, worth notifying is Stobe Harju‘s beautiful site, full of information of this maverick (heh, sorry, Stobe). See it here: http://bit.ly/aX4aUt – oh, and I happened to create the score for his video montage, “Lumina Aeterna”. It’s right there on the front page. Sheer magic, his work.

Everyone can put together a pile of clips and call it something, even a movie (which is often the case) – but there are only a handful of guys that can make a grown man cry by just cutting from scene to another, I’ve seen Stobe do that, so the words of Sam Lake (“I’d trust any story of mine into his hands”) aren’t just words, they carry a lot among them. No wonder he’s so busy.

By the way, the vocals on that track were kindly provided by Cait McWhir/Tonehammer. Thanks!

Buy Korg M1 Le (and get a gratis Nanokey!)

Don’t get me wrong – I do like analog synthesis and heavy-duty digital algorithms, yes, but I’ve always had a soft warm spot for Korg M1, and even though I’ve had my fair share of them (a keyboard version for gigging which was torn apart during the 800+ gigs, then an M1rEx in a rack), there’s a certain furry quality to its sound which I find hard to resist.

I already thought I’d gotten over it. I mean, I already have Korg’s Lecagy Collection and even though the Polysixes and MS-20s and Mono/Polys are not worth of praising in a loud voice, the digital reproductions of their digital keyboards are actually quite good – better than the originals. Then came last week. I visited a local store and a guy working there managed to sell me a Nanokey 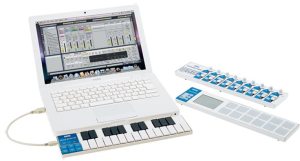 by whispering “wanna buy an M1 for 49 euros?” – does a bear poop in a forest? Pope still has a hat? To be honest, I didn’t think a second. Its sawtooth wave and other single cycle waves are so bad they’re actually beyond critisism. The best sharp, snappy, piercing sawtooth arpeggios I’d ever done came out of an M1. Oh yes, there will be a demo later, but believe me, the mellow two oscillator pads with Symphonic Ensemble on at about 50% are instantly sleep inducing and VERY relaxing with longer attacks and noisy “reverbs”. Sort of Analog Synthesis á la Frankenstein. Not quite there, but if you’re squinting, it’s actually rather nice and the raw resolution of the waves and D/A converters sort of melts in the current. 🙂

“What the hell”, I thought. “I could use M1 Le for fun, at home. It’s cheap and all.” Little did I know: it’s been three days now and I’ve already found the Nanokey very handy. Most likely the best home keyboard I’ve got: able to transpose, to send Midi CC and note data, velocity sensitive (sort of) – and no shit: pitch bend as well. Ableton Live cries for Nano products. So does Melodyne (it’s sometimes quite handy to play notes in). Speaking of Logic, I don’t know, really – but perhaps Nanokontrol would be great?

Of course, as one might imagine, the velocity sensitivity is more on the sketchy side and the push button pitch bends don’t really deliver the overwhelming inner urges the way they should be, but it’s still better than about anything else in the shop. For notation and score editing it could be a good shot, sitting neatly on the desk next to your laptop or keyboard. For myself – being an EWQLSO user – I found it very convenient to do keyswitching with a separate keyboard. And for 1/128th-aficionados and prog-wankers the octave switches are the shit: just play a jordanrudess (i.e.: “an incredibly unimportant pattern to songwriting, yet tough enough physically to tame even the hardest and who cares if it doesn’t do the track any good – it’s still the fastest finger job in the world”) and press the octave up/down switches… whoah. Multiple colored leds above the switches do the light show: green means +/-1, orange +/-2, red +/-3 and blinking red is a warning: you’re way too far away from human frequencies. Seriously. Really. Ok, it means “+/-4 octaves”.

After a longer session with just the Nanokey and my laptop, I had an awakening: the “keys” are wide enough to produce a sense of a “real keyboard”. I needed no adjusting or mental rehearsals like I needed with KLC MS-20 Controller and its tiny keys. This is apparently due to the shape of the Nano Key: one doesn’t (have to) associate and compare it with “proper” controller keyboards. If it’s tiny and flat (only a wee bit larger than Casiotone VL-1, yet about half as thick), it’s something else. 🙂

Nanokey can also send Control Commands, and a separate editor program (downloadable from Korg’s web page) can handle all editing rather neatly. No quirks and crashes.

You can even define a momentary/toggle parameter – and disable all keys not needed in your setup, plus define both the “On” value – and the “Off” value as well. Handy. There can be different keys assigned to, say, Control 14, and all these assignment values can naturally differ from each other. Another plus: keyboard mode and CC mode can be assigned to different MIDI channels. And that darned velocity sensitivity can be switched off, thankfully, although the more I play with Nanokey, the less the sensitivity bothers. What the hell, people have always adjusted easily to current conditions.

The price/fun ratio is about as high as can be. You could, if necessary, replace “fun” with quality as well. Or benefit. Korg has another winner here, and at 49 euros it’s hard to beat.

Other Nano products: Nanokontrol (59 euros, a tiny mixer controller) and Nanopad (59 euros, a handy drum pad with a gratis EZDrummer Lite). If I were you, I’d buy three Nanokontrols (and create a larger mixer) or Two Nanokeys (one for each hand). Just save some money for an active USB hub, you might need one sooner or later.